Bryan Falchuk on the Future of Insurance 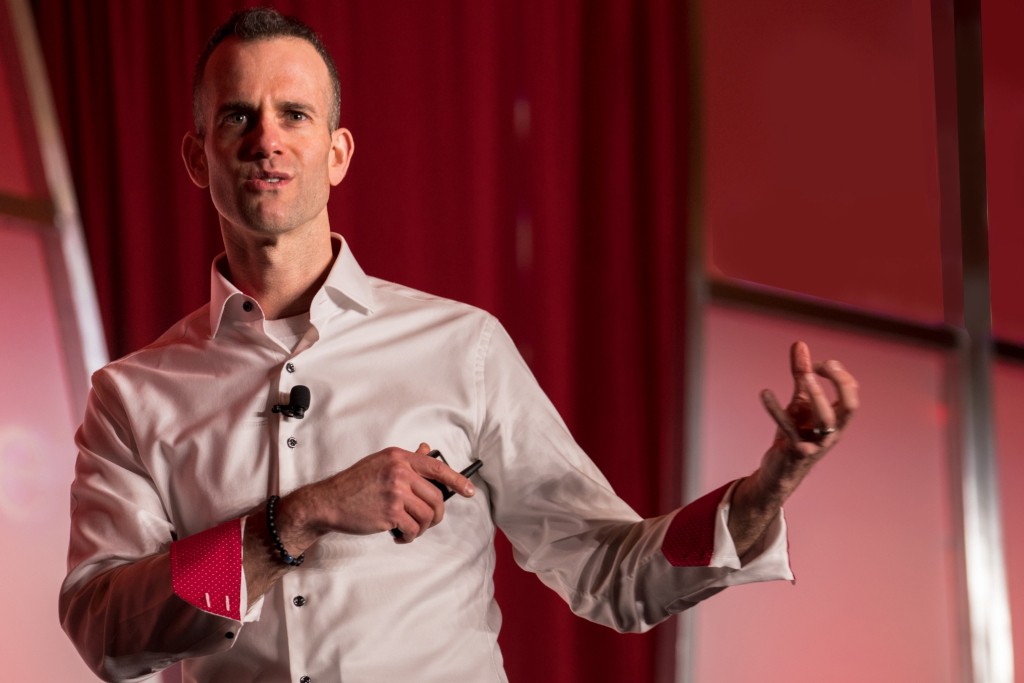 Bryan Falchuk is the Founder & Managing Partner at Insurance Evolution Partners, which advises carriers and their partners on how to navigate an evolving industry facing disruption and change. Bryan spent over 20 years in the insurance industry, including serving as Head of Claims for Hiscox USA and leading Growth for insurtech communications solution, Hi Marley. Bryan has also held leadership roles in corporate strategy, operations and distribution at carriers like Liberty Mutual and Beazley. He was a consultant in McKinsey & Company’s insurance practice and is on the advisory boards of several startups focused on the insurance industry. Bryan is an author and public speaker, including several TEDx Talks. His best-selling book series, The Future of Insurance: From Disruption to Evolution, shares case studies of legacy and startup carriers overcoming the barriers to change we all face in the industry to innovate to help Insurance move forward and evolve.

The following are excerpts from a conversation between Bryan and Andrew Wynn, Co-Founder and Co-CEO of Ascend, the first modern insurance payments platform that provides automated all-in-one financing, collections, and payables.

What are some of the top insurtech trends you’ve noticed this year?

This morning, I had a conversation with an auto insurance carrier about what insurance will be like 10 years from now. I think embedded insurance will drive more change by the 2030s than autonomous cars. It allows insurance to no longer be big, expensive, and complicated. With embedded insurance, it’s more broken down. In auto, it exists in a world where automakers increasingly have subscription offerings, a direction we’re already moving in. Car makers will become more dependent on SaaS models for their valuations, and insurance will be worked in there by embedding it. Think of it as a subscription with your car and everything else bundled together — including the insurance. If car subscription services take off, which companies like Volvo have had some success with, then insurance is already a part of that game. Embedding may bring in new, simpler coverages. Everyone thinks that autonomy is going to be what destroys personal auto but embedded insurance might do it a lot sooner.

Low-code/no-code is another big one. It’s a bit overused, but I’ve been seeing a ton of startups that are low-code/no-code products and agent/broker portals and system solutions. It seems like, in this past year, there’s been more products targeted towards the broker side of insurance. There’s a lot going on in this space, trying to give agencies more flexibility while maintaining their systems and processes.

What kind of products and solutions need to exist in order to get to that end point?

A lot of products and services may already be there. It’s more so a question of how they’re bought. Go back to the Steve Jobs Apple days when the iTunes Music Store came out. iTunes was challenged by Rhapsody and then Microsoft’s Zune, and others. They all wanted you to subscribe, but people, including Jobs, pushed back because they wanted to own their own music. Those subscription services all failed, but today, music almost entirely subscription-based, including Apple, who is one of the biggest in the space.

Now you look around and ask yourself, how many other things in my life do I own right now that I probably won’t in the future? I think that cars are an obvious example. We’re already seeing a move into subscription features for cars, like Tesla with Full Self Driving, GM with OnStar, etc. But what else in our lives can be made into a subscription? One example is home alarms — they’re a subscription. But more recently, we’ve been seeing cameras included. Fast forward and the concept of a connected home is more of a thing — rent, alarm, water, utilities — all of these are subscriptions, but they’re all separate. What if they weren’t? This is a subscription economy. Where does insurance fit into that? I think that the more subscriptions take hold, the easier it gets to inject insurance into that.

It’s less a question of technology or solutions and products that need a lot of work in many cases. I think it’s more the attitude and culture of our industry. I see plenty of companies that pat themselves on the back for being open to innovation and change, but they’re not really doing things all that differently, or differently enough. I would like to see more of a willingness to disrupt yourself, including startups. To the extent that you think you’ve ‘got it’, you’re not going to be open to hearing about what you lack or are missing. This applies to incumbents and startups. I’ve certainly talked to founders who seem to think that they and only they are the key to fixing the entire industry. As an industry, we need to be a lot more open, much more willing to shake ourselves up.

How can insurtechs better serve incumbents or vice versa?

Insurtechs are not going to put all the incumbents out of business or vice versa, whether you’re talking about carriers or suppliers or solution providers. It’s about trying to understand the people you’re trying to work with, or maybe even compete against. This isn’t an industry of idiots or dinosaurs, these are intelligent people with complex problems beyond what you’re aware of. It’s really easy to look at a company and presume something and pass judgement. It’s much better to just step back and ask why they might be doing what they’re doing. If you’re trying to partner as a startup, try to understand where that incumbent is coming from and to make it work given that perspective rather than just be frustrated by it. And the same for legacy players looking at startups. It takes willingness on both sides.

What particular verticals make sense for startups/insurtechs to partner with incumbents?

It depends on the carrier and how good they happen to be at something or what their cost structure looks like. A lot of carriers are cumbersome and slow, particularly around payments. It’s not necessarily because they’re bad or inept, but because they have tried to manage expenses, and Finance is an area the CFO can always deliver on when other functions struggle to control costs. I generally see finance and payments being under invested in as a result of this. Having slow or difficult payment processes isn’t viable for a business in today’s world. Insureds are not accustomed to waiting long periods of time for payment or dealing with paper checks. You can’t follow the same procedures you had 10 years ago (or longer, in many cases).

However, I do think that a lot of the big investments carriers made in recent years have been good ones. For instance, core underwriting systems. They’re traditionally very expensive, but necessary. Without these investments, carriers wouldn’t be able to tap into the universe of API-driven, cloud-based solutions that can really revolutionize how insurance is delivered.

Today, carriers can turn to light-weight solutions for things like payment infrastructure and get better tools with more flexibility for a much cheaper price. These can be cost savers, but also drivers of growth for insurers as they can help distributors sell more by eliminating labor intensive, expensive processes while providing customers with better solutions to meet their needs, like online checkout and financing options they’ve come to expect from every other aspect of their lives.

How can insurtechs better learn from incumbents (whether distributors or carriers), and where is the most obvious, but misplaced hubris on the insurtech side?

Insurtechs are generally advantaged at asking and listening. Anyone who has raised funds knows that VCs value founders who actively talk to and understand the market. You need to be able to ask questions, listen, and use what you learn to evolve your product and mission. It’s a constant flow of asking.

Insurance is a relationship business, which means that people want to talk and network. You need to be hungry to hear more. That’s what it boils down to — don’t be afraid and just ask!

In regards to lessons to learn, it’s around making presumptions. It’s easy to make fun of insurance as slow or boring, but don’t fall into that. It’s frustrating for everyone involved. You need to be able to empathize with the person on the other side of the table. Talk to them from the pain they’re in, not from your own perspective of their failures.

What do you think the insurance industry will look like in 5–10 years, particularly around distribution?

The modern crop of MGAs is a mechanism for becoming a carrier and it’s a lower cost way to prove out your model before you have to secure statutory capital, which is very expensive.

I also think that embedded will become an interesting pivot point here. As long as there’s a relatively expensive complex product customers have to explicitly buy (and that they don’t want to buy), you’ll see a need for an intermediary as a guide and advisor. You’ll also see many who self-service through direct options on simpler products. And then there’s the gray area where some people might go to either channel, or mix channels depending on the coverage.. I think we’ll see the same mix going forward.

But, as soon as embedded comes in, you begin to look at all the friction points that would lead someone to want or need an advisor in the process. When you go to rent a car, you don’t call an insurance agent to determine which level of the loss waiver you chose. If you’re going to subscribe to some kind of service, and insurance fits into that (like Zipcar, which already includes insurance), then distributors will have a hard time fitting into that world.

However, I don’t think that’s enough of a reason to disintermediate and claim that agents and brokers will no longer exist. As long as there is commercial insurance and complexity, there will still be distributors. Digitization in and of itself will drive a change in distribution, but won’t inherently be the end of it. Embedded is one way to remove the friction a bit, and that may lessen the need for intermediaries, but I think you will still have plenty of situations where distributors are very valuable.

And the question becomes, what do you want to do about it? Do you engage in it, or dismiss it? At some point, you don’t have a choice to change strategy because the world has changed too much to support how you used to work. So I say, plant your seeds. If an OEM car maker is going to do embedded insurance, they won’t have thirty different markets they work with — they’ll have one or two. You will want to be part of that conversation so you’re still part of the market down the road. Don’t be afraid of this stuff, engage in it so you can be part of the solution.

Bio: Andrew Wynn is the Co-Founder & Co-CEO of Ascend, the first modern insurance payments platform that provides automated all-in-one financing, collections, and payables. Prior to Ascend, Andrew built a home maintenance startup called Sheltr, which provides homeowners with routine preventative maintenance service and diagnostics to offer data-driven proactive care to catch issues before they become costly repairs. The company became the first acquisition made by insurtech unicorn Hippo because of its intuitive and technological approach to building an insurance product that went beyond the customer interaction. Prior to Sheltr, Andrew was at Instacart, leading the company’s product and data integration team.‍